The environmental impact of nitrite in water – Could it be more significant than previously thought?

In aerobic environments, ammonia from agricultural pollution, sewage, decaying protein and other nitrogen pollution sources becomes successively oxidised (nitrified) to nitrite (NO2–) and then to nitrate (NO3–). Nitrate, is of course, a recognised environmental issue due to its role in eutrophication and groundwater contamination.

But what about the environmental impact of the nitrite intermediate? If present in freshwater, nitrite is known to be toxic to almost all living creatures. This is due to its impact in decreasing the oxygen-carrying capacity of blood. In infants, this phenomenon is called blue baby syndrome; in fish, it is known as brown blood disorder.

Nitrite is a metastable anion. In basic terms, then, it doesn’t tend to hand around too long. When present with oxygen and the right microbe population (as will generally be the case in surface water) nitrite’s natural propensity will be to accept an additional oxygen ion, becoming nitrate. So, ecologists, environmental scientists, analytical chemists and catchment managers can safely disregard its impact on aquatic environments and species. Well, that is very often the theory any in case…

The fact is that, until now, it has been extremely difficult to perform high-resolution nitrite monitoring in the field. Achieving the relevant limits of detection is an issue. Colorimetric (Griess) methods don’t lend themselves to easy portability.  Even capturing nitrite with manual sampling can be problematic, unless samples are placed on ice.

The experience of one of our early adopters of Aquamonitrix® for field-based monitoring is that nitrite can in fact persist in the environment longer than may sometimes be assumed. Moreover, in this study, it was  an effective indicator of nitrogen pollution sources.

Dr Paul O’Callaghan is a catchment scientist with Ireland’s Local Authority Water Programme (LawPro) in the South-West Region. The territory covered by the team includes Rosscarbery – a coastal village in West Cork with a tourist industry and a functioning fishing harbour, surrounded by pastoral land and several milk-processing co-ops.

The area is designated as of ‘moderate’ concern for nitrate. The harbour is affected by algae blooms during the summer months, and the community has raised complaints about the smell of rotting algae.

Paul explains that the role of LawPro South West is not to police environmental compliance but to work as trusted advisors to the local farming community. “We want to understand the cause of water-quality issues, so we can provide better advice about best practice management strategies to keep nutrients in the fields and out of our water systems.  This is the win-win outcome everyone wants, and we are working to achieve it through awareness, education and collaboration.”

The team was using a mains-powered Aquamonitrix analyser to quantify the nitrate load entering the estuary at Rosscarbery.  So, the location was ideal to trial the performance of a new battery/solar -powered pack developed to power an ‘unplugged’ Aquamonitrix® unit, enabling off-grid monitoring.

Using the second unit as a mobile analyser, Paul picked up elevated nitrite concentrations of 1.58 mg/L (as NO2-) – in tandem with nitrate levels of 8.66 mg/L (as NO3 -), which were unremarkable for the river.  An assessment of the area revealed the source of the nitrite was a leaking storage tank on a farm approximately 1km upstream, and this was confirmed with grab samples.

“This didn’t patricianly surprise me,” Paul says. “When you have ammonia and nitrate, you can expect that nitrite will also be in there somewhere. By the time the flow was reaching our fixed-position analyser at the mouth of the river, the nitrite had already oxidised to nitrate.  But our mobile monitoring revealed that the nitrite pulse persisted for about1km downstream. That would indicate nitrite is less transient than some models indicate.” 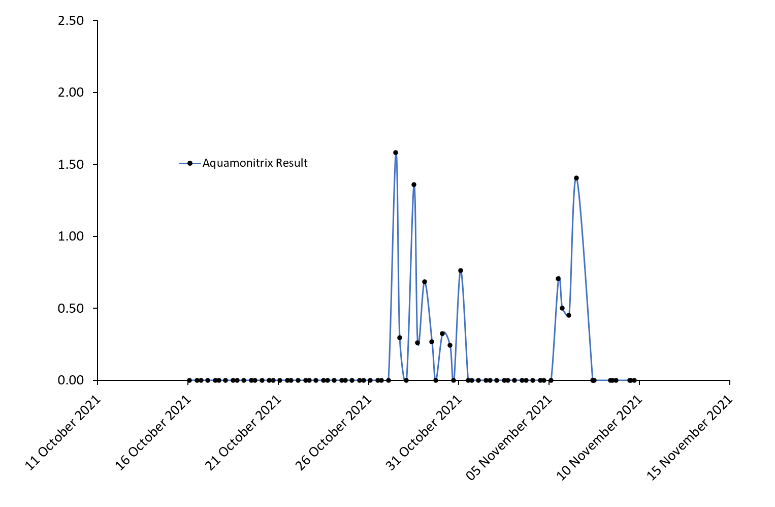 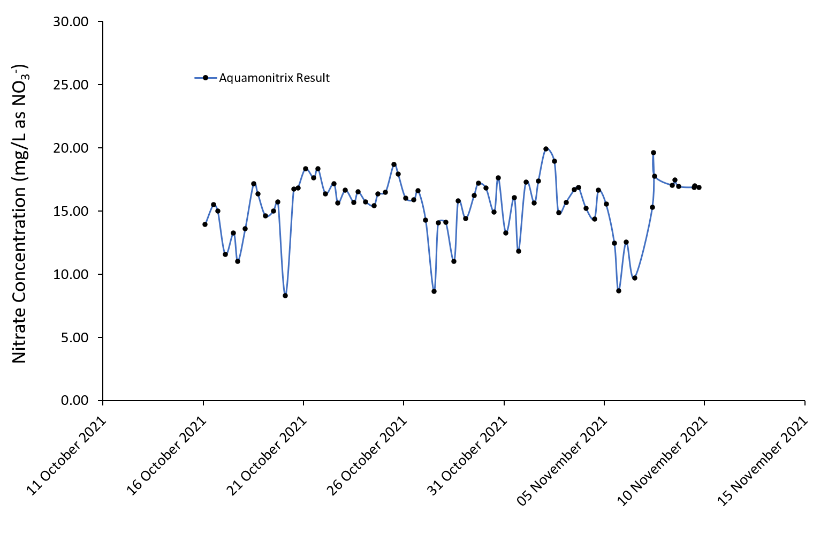 So, do we need to talk about nitrite?

Finding the leak was a success in itself, as it was contributing to the overall nitrate load to the harbour. But the study also raises broader questions about nitrite in aquatic environments.  For example, can it be highly effective as a marker of pollution sources in catchment studies? Also, is the presence of nitrite – and its potential ecological impact – currently being under-estimated?  We await with interest to see what emerges from further studies of surface and ground-water using Aquamonitrix®.

Coming from a research institute? Find out about collaboration with researchers...
Find out how we solved nitrite exceedance concerns for a drinking water company