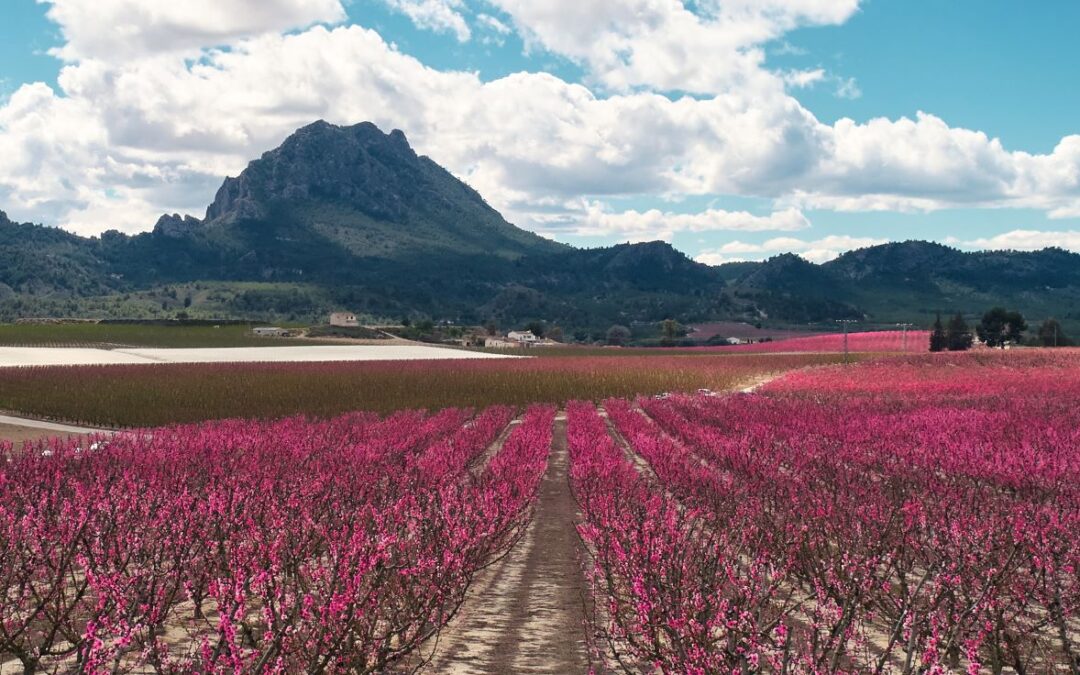 Spain’s Murcia region achieves world-leading rates for wastewater recycling. For the past nine months, Aquamonitrix® has been used to monitor nitrate and nitrite concentrations in treated wastewater – before it is re-used for irrigation – at two facilities in the region. The next step is to trial the analyser in the plants’ aeration basins, where biological nitrogen removal takes place.

The Region of Murcia forms part of the Segura River catchment – the most water-stressed river basin in all of Spain. Yet these parched lands, home to just over 1.5 million people, are a horticultural powerhouse, producing 20 per cent of Spain’s fruit and vegetable exports.

Recurrent drought and this imbalance between water availability and demand has forced ESAMUR (the Entity for Sanitation and Treatment in the Region of Murcia) to drive wastewater re-use to its limits.

ESAMUR operates about 50 WWTPs in the region, serving 99% of the population. Most facilities provide tertiary treatment, and virtually all treated wastewater is reused – either directly for irrigation – or indirectly. Some of the indirect-use projects include restoring river flows, creating new, artificial wetlands and replenishing aquifers by filtering treated wastewater through dry channels.

Resonating with circular-economy policy, wastewater re-use is increasingly seen as part of the solution to water scarcity, drought, overexploitation of aquifers and the eutrophication of lakes, rivers and coasts.

The EU’s Water Reuse Regulation is set to apply from 2023. However, well in advance of this, in 2007, Spain took a lead position, establishing national wastewater reuse legislation.

A Royal Decree (RD 1620/2007) sets out minimum water-quality standards and frequencies for sampling and analysis, depending on the re-use application. The regulations define five overarching re-use categories: urban, agricultural, industrial, recreational and environmental. In general, samples must be taken at the outflow of the wastewater re-use facility and at the delivery point to users.

ESAMUR’s conventional nitrate monitoring regime sees automated samples being taken hourly and the composite sample being analysed in a laboratory every 24 hours.

Supporting the move to real-time monitoring, however, for the past nine months EMASUR has been trialling Aquamonitrix® analysers at two of its facilities: Alcantarilla WWPT, which serves a population equivalent (PE) of 67,000, and Los Alcázares WWPT, serving a PE of 22,500.

Aquamonitrix® is automatically sampling and analysing the treated wastewater every six hours, and the nitrate and nitrite concentrations are being transmitted via IoT in real-time to the proprietary data management platform, known as Datamonitrix (See screenshot below).

With expected (normal) parameters for treated wastewater of 3 to 11 ppm for nitrate and 0 to 5 ppm for nitrite, the plant operators have configured Datamonitrix so that an alarm is automatically triggered if nitrate levels exceed 20 ppm or nitrite levels exceed 10 ppm.

This provides peace of mind when everything is working as it should be, and it allows for instant intervention should there be a problem, rather than having to wait for laboratory results that would only be available after the event.

Self-diagnosis data from the analysers are also transmitted in real-time to the Datamonitrix platform, accessible directly on the operators’ PCs, adding an extra layer of reassurance. 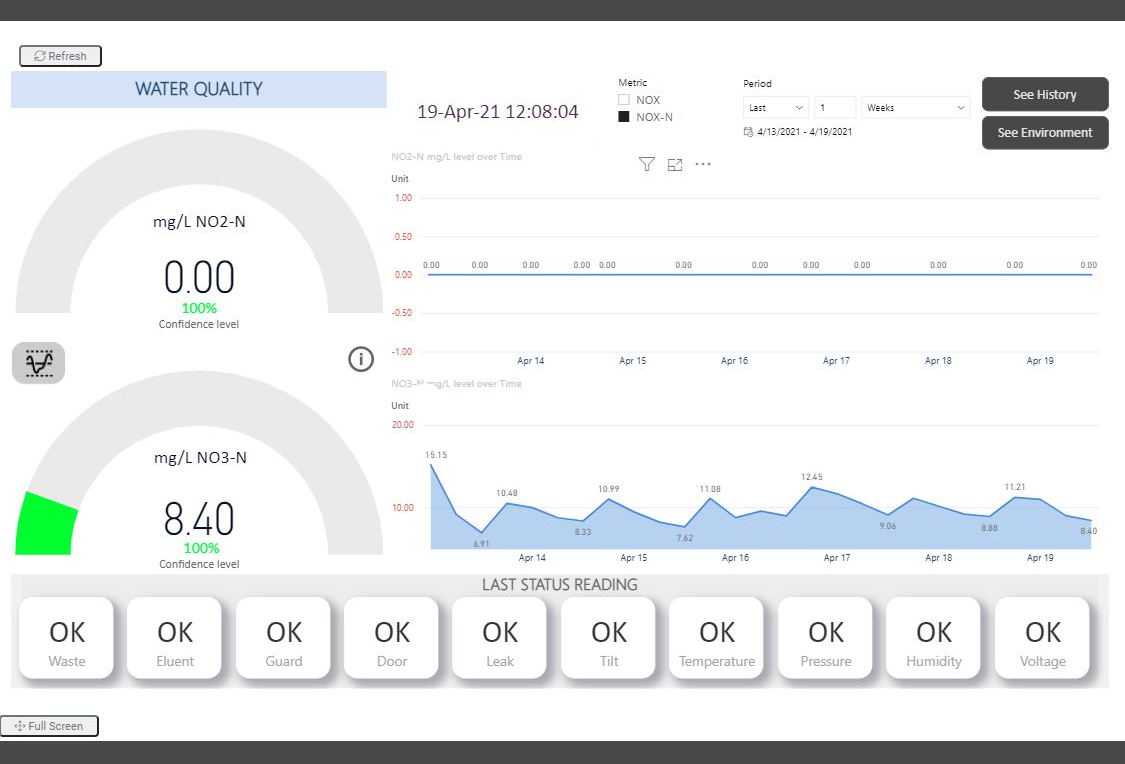 The Aquamonitrix® units have only once required recalibration over past nine months. This is sharply in contrast to many competing autonomous nitrate analysers, which suffer from accuracy drift and need frequent, time-consuming intervention.

The analysers were initially deployed on the two sites as part of an EU-funded commercialisation project (Horizon 2020, LIFE programme) involving the Catholic University of Murcia (UCAM). On completion of this six-month demonstration, the operators at ESAMUR requested an upgrade to the commercial Aquamonitrix® model.

Following this hardware and software update, a member of the Aquamonitrix® team in Ireland provided training by video to a technician at Incoagua S.L.  – Aquamonitrix’s local service partner on the ground in Murcia, Spain. She, in turn, performed the recalibration for ESAMUR.

Other than that, the only interventions required for ongoing operation are two simple 5-minute procedures that can be performed without any special technical skills.  The sample syringe components are cleaned once every three weeks as a precaution against biofouling, and, once every 100 days, the spent eluent cartridge is refilled and the sample waste container is emptied.

At the start of the deployment, a technician from Incoagua took grab samples and had these analysed for nitrate using accredited instrumentation. As Figure 2 shows, this confirmed that Aquamonitrix® was providing laboratory-quality accuracy.

The exceptional level of accuracy and selectivity is possible as Aquamonitrix® integrates ion-exchange chromatography – to separate nitrate and nitrite – with optical detection of the two anions, separately. The optical detector is a 235 nm deep LED-UV cell, eliminating the interference issues associated with conventional UV measurement. 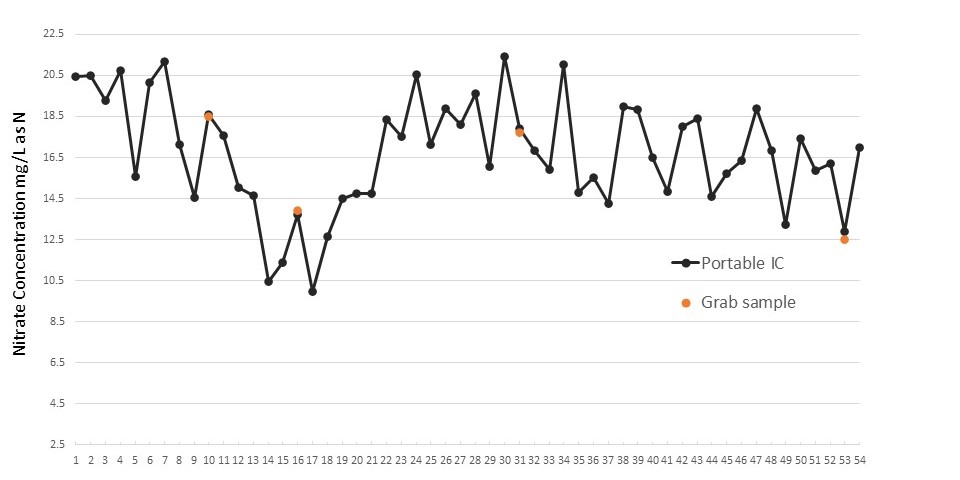 Carlos Lardín Mifsut, who is responsible for WWPTs in ESAMUR’s ‘Zone II’, says the team would like to continue using the analysers at the outflow points but also to look  at other parts of the treatment process. “In the outflow, we are really only interested in nitrate. However, we are excited about the prospect of using the real-time nitrate and nitrite monitoring capabilities of Aquamonitrix® in the activated sludge basins,” he explained.

Here, in the aerated nitrogen-removal zone of a WWTP, real-time monitoring of nitrate versus nitrite is seen as a key enabler process optimisation to reduce energy use and minimise the emission of nitrous oxide – a greenhouse gas (GHG) with about 300 times the global warming potential of carbon dioxide. So, for wastewater operators everywhere under pressure to achieve sustainable operational costs and ‘net-zero’ GHG emissions, the benefits could be truly game-changing.

“We would like to continue using the Aquamonitrix® analysers at the treated wastewater outflow point… We are also excited about the prospect of using real-time nitrate and nitrite monitoring to identify opportunities for process optimisation in the activated sludge basin.”